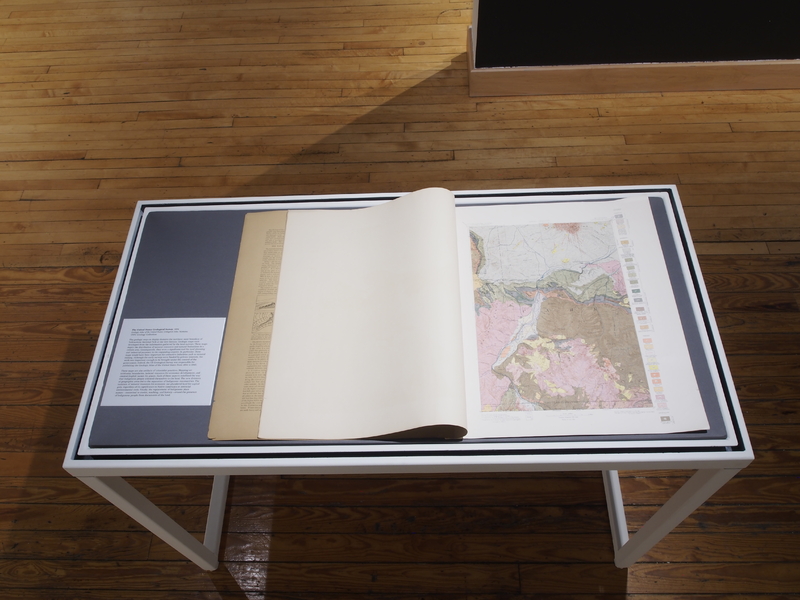 The geologic map on display is from the OWU Geology collection. At the very bottom of the page the northern most boundary of Yellowstone National Park is visible. Geologic maps were developed from the information gathered by the land surveys. These maps depict the distribution of mineral resources and natural formations in a certain area. Consequently, they were a significant tool for land planning and industrial purposes in the expanding country. In particular, these maps would have been important for extractive industries such as mineral mining. Although the early surveys were funded by private interests, the work was important enough to be brought under the control of the government. Indeed, the US Geological Survey was responsible for publishing the Geologic Atlas of the United States from 1894 to 1945.

These maps are also artifacts of colonialist practices. Mapping set territorial boundaries, isolated resources for economic development, and created English names for places. Each of these aspects redefined the way that Indigenous people oriented themselves to the land. The new divisions of geographic areas led to the separation of Indigenous communities. The isolation of mineral resources for economic use plundered land for capital gain, regardless of its significance to Native Americans or potential environmental costs. Finally, the replacement of Indigenous place names—connected to stories, teaching, and history—erased the presence of Indigenous people from documents of the land.