Landscape Through the Lens: Responses to William Henry Jackson 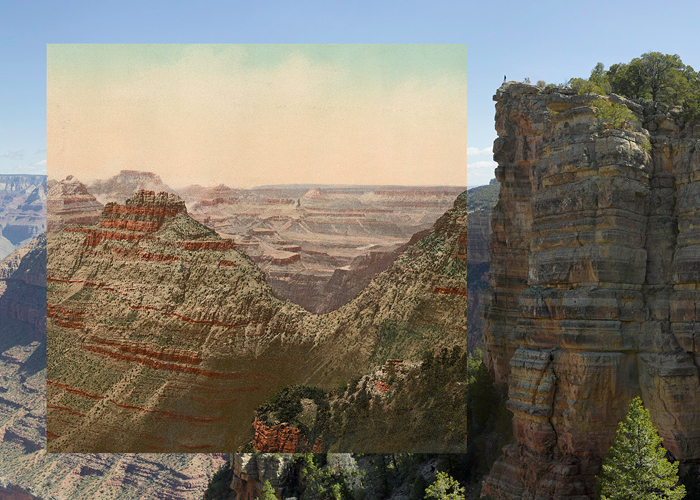 Landscape Through the Lens: Responses to William Henry Jackson brings four contemporary photographers into conversation with the work of 19th-century landscape photographer William Henry Jackson. Through this lens, it examines the legacy of photography in relation to the development of the American West. This exhibit was organized with works from the Ross Art Museum permanent collection and also includes loans by each of the featured contemporary artists. The digital version was made as companion to the physical exhibit on display at Ohio Wesleyan University's Ross Art Museum from February 3-April 8, 2021.

Through a confluence of circumstances, landscape emerged as a significant American artistic genre in the 19th century. Inspired by the scale and breadth of the American wilderness, painters and photographers portrayed natural scenes as evidence of God’s role in creation. The landscape also came to be seen as a symbol of national promise. By midcentury a new need arose that the photograph was uniquely positioned to fill—documenting the west. Politically, the United States was rapidly acquiring new tracts of land through wars and treaties. Manifest Destiny, an ideological conviction in the morality, virtue, and divine mission of western US expansion, further propelled the exploration of new territory. By the 1860s, advancements in photographic technology made it possible to take equipment into the field and to more reliably fix images to paper, which increased the photograph’s use for educational and commercial purposes. Since the medium could faithfully record the form and structure of natural features it became a desirable documentary tool.

William Henry Jackson was employed by one of the early western surveys, which eventually grew to include all of the American territories touching the Rocky Mountains.  In this exhibit, images by Mark Klett and Byron Wolfe illustrate how this endeavor brought together a network of scientists, artists, politicians, and businessmen. Understanding the surveys as precursors to expansion and industrialization helps contextualize how photographers like Jackson were part of a larger system of national development.

Martina Lopez’s photographs invite us to consider the role of nostalgia, memory, and story surrounding the American settlement of land. Photographic images played a significant role in developing the public image and perception of the west and laid the foundation for American settlement. Generations of almost exclusively white homesteaders established towns, homes, and lives on the land allotted by the US government. These portraits, set against sepia landscapes, ask viewers to consider the ways in which American heritage is still bound up with settler values.

Photographer Zig Jackson’s images offer valuable perspective of the ongoing impact of settler colonialism on indigenous peoples in this country. Land surveys had ethnographic facets, which detailed the people and cultures already living in places the American government wished to develop. Today, Indian reservations remain a legacy of the forcible removal of Native Americans from ancestral lands and the struggles for land rights that continue today.

Landscape Through the Lens invites viewers to reflect on the ways that photographs of the American West have shaped the United States’ sense of self.