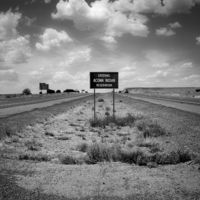 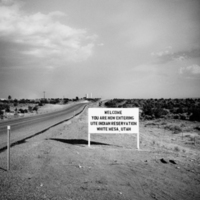 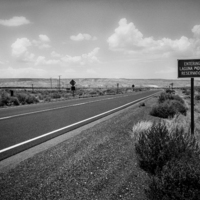 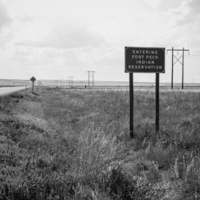 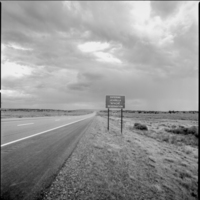 The “wilderness” celebrated in 19th century landscapes by photographers like William Henry Jackson portrayed the land as wild and untamed and, hence, in need of domination and domestication. Likewise, the people and cultures documented in the ethnographic arm of land surveys represented those the U.S. Government wished to control. The rhetoric and logic pervading the photography of the era privileged the land rights of settlers and ignored the rights of Indigenous peoples.

The contemporary photographs on display here are from Zig Jackson’s Reservation Signs series. These signs, set in brush or dirt off the side of the highway, are reminders of a painful and often neglected history with ongoing repercussions. The first reservations were established in 1851, with the passage of the Indian Appropriation Act. Less-desirable tracts of land to which Indigenous peoples were forcibly relocated, reservations forced distinct communities together in a system integral to westward expansion and devastating to the lives of Indigenous peoples. The repetition of the signs in Zig Jackson’s series reminds viewers that reservations were the result of a systematic, widespread, and largely successful effort to remove Indigenous people from land for the tangible benefit of settlers and the United States government.

The tone of Zig Jackson’s photos stands in stark contrast to the sense of promise and possibility in the landscape photography of William Henry Jackson. In this way, Reservation Signs provides a somber reminder of how the US government has distorted and dictated the way Indigenous people in this country can relate to land. Although Native Americans live throughout the United States today, on and off reservations, this history of loss—as well as the extraordinary power of survival in the face of oppression—is essential to understanding contemporary resistance in movements such as LANDBACK and protests such as those against the Dakota Access Pipeline at Standing Rock.